im in northern ireland and i had an appointment with the gender identity clinic for under 18's 3 days ago about medically transitioning.

they told me when i get referred to the adult clinic (next year) that they will automatically turn me down for testosterone if im a smoker, they also said i have to loose a bit of weight even tho im at a healthy weight for my height and age. they said im not allowed energy drinks either and i have to cut out junk food from my diet, even though ive had check ups at my doctors office and they said im perfectly healthy (for what i can be being a smoker, but the doctor also said that surprisingly smoking hasn't affected me that much). the under 18's clinic said i have to loose weight, stop smoking, cut junk food out of my diet and exercise more by my 18th birthday which is in may 2019. im worried about not being able to do it, i have the motivation but its such a short period of time and they said if i don't then i don't get testosterone and i don't have enough money to go to a private doctors/hospital. can anyone offer any advise? i don't know what to do and its putting me under a lot of stress. i don't exactly want to quit smoking and ive heard of a few trans people who smoke so? idk?

The Transgender Day of Remembrance is on the 20th November, as always. It's way too late here to do a call-out for the Webcomic Project, but I will say that I've moved the archive from ComicDish to ComicFury.

(the new logo for the ComicFury version)

The ComicDish version is still there, until February when ComicDish disappears forever. But all of it has been copied over to ComicFury, and I'm glad I made this move. The archives can now be searched!

If you are still interested in doing something for the project (which is advertising TDOR by use of webcomic/art/prose/video, go to the Contributing page. Just remember, "...you don't have to be a transgender person to participate, just appreciating or understanding the tragedy of the lives lost that are memorialized by the event is enough".

And if you spot a online comic / artwork / video / poetry or prose that's relevant to this, you can always post a link in a comment to this post.

Almost 3 months on T and I'm loving the progress I'm making already. My voice has dropped significantly and my facial hair is coming in nicely..

My sex drive sky rocketed a bit too much for my liking and it's MUCH harder to reach orgasm.. Does anyone else have this issue?


My facial hair is really light so I darkened it up to see how it would look and how much I have already. For the first time in my life I don't hate looking in the mirror or having my picture taken! 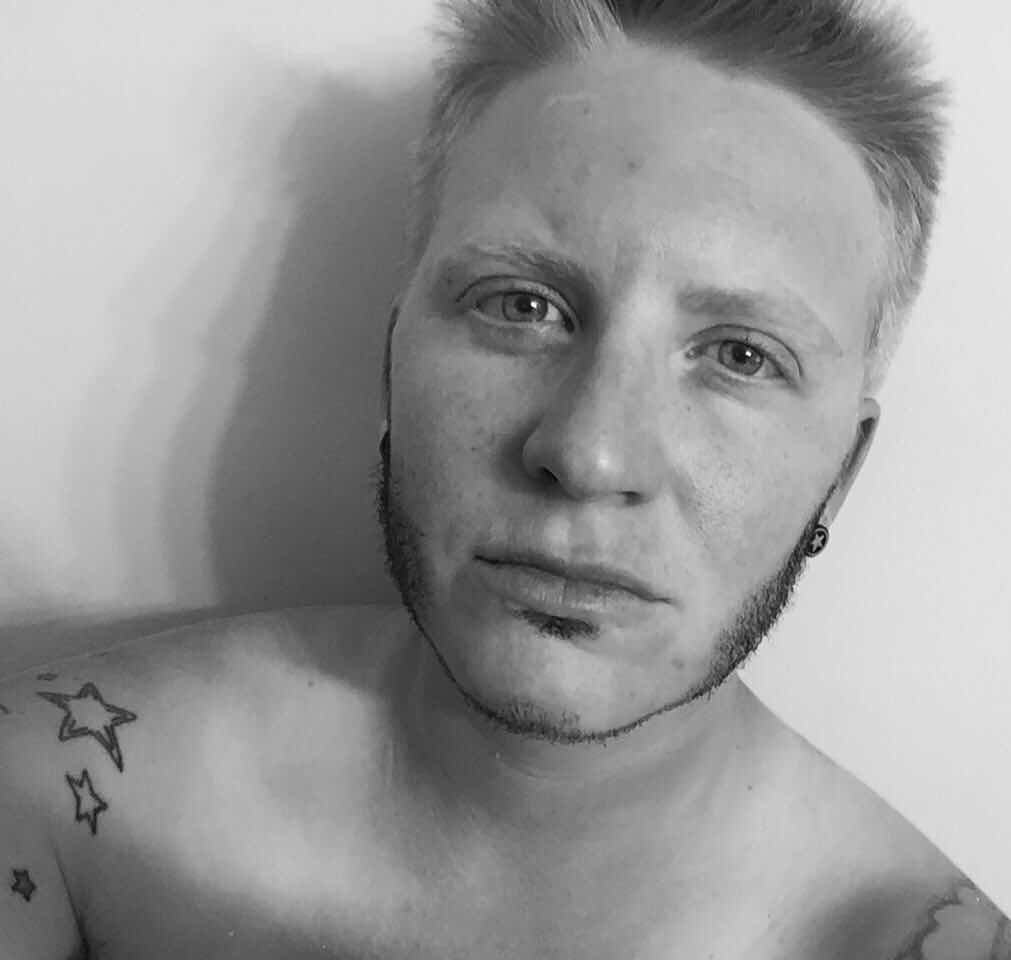 Hi all, I'm looking to touch base with someone who has had a meta with Miro. Hopefully someone who had surgery with him when he was in NYC earlier this year. Thanks!

Okay, weird symmetry here with my last post to this community (three years ago) being about spironalactone, and today's entry being about wanting to get off of spironalactone ... But yeah, I'd like to stop taking it, and my primary physician has said he'll write me a referral for an orchiectomy, so now I have to figure out logistics, find a surgeon (urologist?) who takes my insurance, etc.

Reading aftercare instructions on the web, I see (a) advice to walk a little, then each day a little more, and (b) not do anything strenuous for a while. My bedroom is at the top of a three-storey rowhouse, and even if I put an air mattress in the living room to be on the same floor as the kitchen, I'll have to go up a long flight to the second floor to get to the bathroom. So what I want to know is: does this count as "walking a little" (thus okay immediately post-surgery), or as a risky amount of exervion at first, so I should try to arrange to stay with a friend who lives in a one-storey house for at least a few days after the surgery?

A secondary question, that I figure I'm less likely to get answered but may as well ask anyhow as long as I'm here: since Maryland removed trans exclusions from Medicaid coverage at the end of last year, have folks gotten things like this covered by it, or are the insurance companies handling Medicaid for the state still dragging their feet? (Specifically, I'm with United Healthcare.) If I'm going to have to argue or fight to get this covered, I'm gonna need to psyche myself up for that.

Feminist theorist Laura Mulvey introduced the idea of the "male gaze" originally when talking about movies. She claimed, pointed out examples, and made her case that film footage was shot, directed, planned, and edited by males imagining (consciously or by default) a male audience, and that the depiction of women onscreen in particular was being shaped by this: that the camera ogled actresses, that the way the cameras tracked them throughout, etc, was guided and structured around this male gaze.

Well I just got pissed off... Again. How do I put this, I found out about some cisgender people who just out of their own choice entirely get surgeries that are far more risky than any surgeries that are trans related... And yet the other cis people talking about said cis people, respond by criticizing trans peoples surgeries.

Now... I actually am pro-bodily autonomy, including yes, cis people who want to get extremely risky surgeries- otherwise I feel like I'd be a massive hypocrite, but seeing cis people, entirely of their free will choose to get their ribs removed- not due to disease or health or whatever, and then commentators every, immediately start bringing up trans people, then criticizing trans people for getting surgery makes me upset.

To be totally fair, the cisgender woman in question is experiencing a ton of extremely judgmental hateful comments towards her... And I support her choice to do that, even if I'll never understand that. But... People are comparing removing the ribs- one of the riskiest procedures in the entire world, that makes you far far more likely to get fatally injured... To SRS SURGERY and HRT!!!!!! It's all the fear mongering about trans specific surgery, and all the fear mongering about medical transition that upsets me so much.

And please note, I don't endorse criticizing cis people who seek out very risky surgeries for reasons that are hard to understand, rather I'm simply saying that often times there's a lot of fear mongering, where trans people medically transitioning seems to always inevitably get brought up, you know with all the classic transphobic fearmongering.

So many cis people act like medical transition- especially involving surgery in risk factor, is somehow comparable to a cis person, with no known detectable medical brain problems- just eagerly choosing to get brain surgery for no known reason.

Which to someone who actually knows about these things, knows that's just transphobic fear mongering. Of course there's risks but they are just so vastly exaggerated. I wish cis people, would stop treating trans people, like they are cis people who are seeking some of the riskiest procedures in the world. I wish more cis people would for once realize, that not all surgery is the same thing.

Now whenever I heard of a cisgender person seeking an extremely risky surgery- done because they want it, I'm afraid that it's nearly guaranteed a lot of cis people are going to start bringing up trans people, and then start their fear mongering again. Why do so many cis people do this? It's so aggravating.

I believe everyone should be able to do what they want with their bodies... Cis people seeking ultra risky surgeries included- and without being harassed about it... But I sure do wish people didn't start fear mongering about medical transition of TRANS PEOPLE whenever a CIS PERSON seeks out a SURGERY that is NOT RELATED to being TRANS.
So, yesterday I talked with my fiancee and confirmed that I considered transition. I will now be seeking a gender therapist. Now, I wonder if I'll actually get diagnosed. I do not suffer from dysphoria (or very mildly), am not girly or effeminate in any way. The only thing is that I would feel more at home in a female body. What do you guys think?
Hi,
I'm new here, and quite new in all this transgenderism and identity stuff. I still can't define what I am as no term seem to fit me. Everything feels off. I joined this community so I could share, and get to understand myself better, maybe make some friends that would only know this side of me, and get some advice on what I am uncomfortable about.

What I can say is how I actually feel: like I have a second superimposed body that is female, and that feels like it is the real me, or rather, an upgraded me. I still feel comfortable with my body (no dysphoria), but whenever I have positive emotions (joy, love, mostly), I feel this second skin quite vividly.

I have thought about transitioning, but I have many concerns, once of which feels superficial: I am afraid that I wouldn't turn up as beautiful as I feel I would be...

From NCTE: "the U.S. Office of Personnel Management (the agency that administers health benefits for Federal employees and retirees) issued a carrier letter to their insurance plans instructing them that they can no longer maintain blanket exclusions of transition-related care.

How many think this will be the first step toward forcing insurance plans to remove the blanket exclusion for everybody?
Collapse